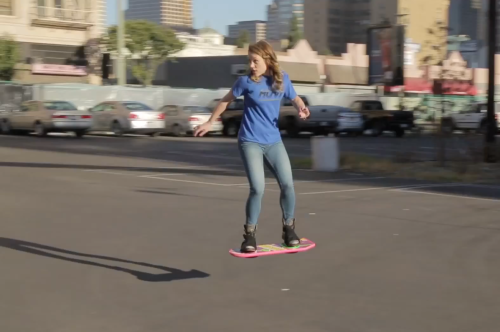 The HUVr Hoverboard Is A Hoax By Funny Or Die! – [Proof Inside]

UPDATE: 06/03/14 Funny Or Die admitted it was a hoax, posting the following statement on their website: “Funny Or Die recently teamed up with a group of celebrities for an elaborate prank to convince the world hoverboards were real and that a company called HUVr Tech had invented them. Sadly, we were lying. The great […]

Vincent Falk And The Screen Puzzle

I met Vincent Falk in London last November and discovered his photography skills. It’s not only his skills that I liked but, mainly his concept of “Screen Puzzle“: The Frenchman overlays other photographer’s shots that depicts actual news with his own pictures. Falk shares his own interpretation of the puzzle but, he invites others to […]

On the first day of the year 2014, some hackers announced that they were able to hack the instant messaging app Snapchat and leaked a document containing usernames and phone numbers of 4.6 million users. The list was made available on Snapchatdb.info but the two last digits of the phone numbers were hidden. This website […]

Coin: All Your Bank Cards In One!

I blogged last month about this innovative Poo-pouri odour-eliminator spray. Now, let me introduce you this new product that’s already available in the US: Coin. Coin is a card like any other swipe-able one and it can be used as any debit, credit or similar card. You don’t need anymore to walk around with all […]

Yekaterinburg is the fourth biggest Russian city in terms of population and it has a very poor quality of roads. Citizens and local media often complain about road holes but it has never shown efficiency. Ura.ru a local website decided to push it further and got street art artists to paint the faces of the governor, the mayor and the vice mayor of the city on three different potholes. A campaign that turned out to be efficient, getting politicians to actually solve that issue.

Wezank: Explain your Ideas Through Simple and Fun Videos

Wezank is a new project created by two Lebanese people: Maya Zankoul and Toni Yammine. It is a great way to visually explain your ideas through simple and fun animation videos. Wezank: Website – Facebook – Twitter – YouTube How It Works? The process consist of six steps that can be found on Wezank.com. Ideation: […]

The first website built by the man who created Facebook, Mark Zuckerberg, is believed to be entitled Mark’s Homepage and saw the light in 1999 when Zuckerberg was only 15 years old. On his page, Zuckerberg had many sections: A java drawing tool, a tool that shows connections between people entitled “The Web” which seems […]

UPDATE: Don’t worry the apple website was not hacked, I simply linked this article to a fake Apple website in which all the images are replaced by “lol-cats”. I did this using an on-line tool and here is how it works: Go to Meowbify website (meowbify.com). Enter the URL of the website you want […]

Thanks to your public Facebook statuses and foursquare data, this website knows what you’re doing! Some wants to get fired, others are hungover while some are taking drugs and don’t miss those who got a new phone number 🙂  All this is done by Callum Haywood a teenage web developer. Disclaimer at the bottom of […]

. I already evoked the major issue of media censorship in Lebanon in the video-report I did in January 2012. On Sunday, June 25th a new Lebanese web-series released its teaser, for the first season, on YouTube and reached more than a 1,500 views in the first 24 hours. “Mamnou3!” (Forbidden in Arabic), created by […]

2
thejrexpress
The JR Express
Create a free website or blog at WordPress.com.